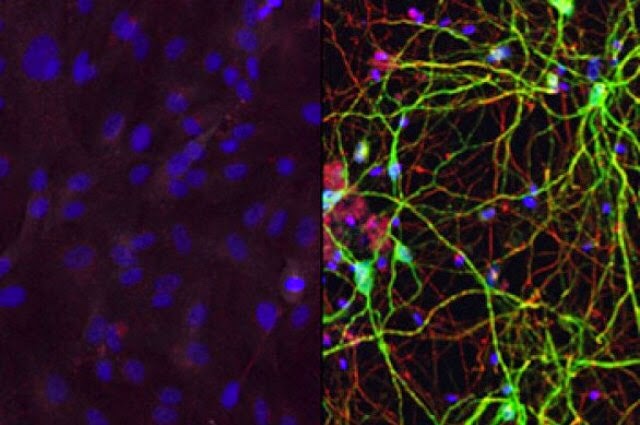 Using a finely tuned cocktail of small molecules, researchers from Washington University in St. Louishave successfully converted adult skin cells into the major type of brain cell affected in the fatal neurodegenerative disorder Huntington’s disease. For the first time, this was achieved without the need to go through a stem cell intermediate, avoiding the production of other types of cell. Importantly, when the researchers transplanted these cells into the brains of mice, they survived and showed similar properties to native cells. While it is still in the early days, these preliminary results could suggest that in the future, this technique may be developed further to help patients with Huntington’s. The work has been published in Neuron.

Huntington’s disease is an inherited brain disorder that causes the progressive degeneration of nerve cells, or neurons. This disease predominantly affects a type of cell called medium spiny neurons (MSNs), which are crucial for movement control. As they are gradually lost in the brain, the patient experiences involuntary muscle movements and cognitive decline. While there is currently no cure, a future possible treatment avenue could involve replacing the lost cells in the brain. But first, researchers need to work out a way to not only produce these cells, but also to ensure they are not rejected by the patient, which is what the Washington University scientists are working towards.

Previous work by this team found that it is possible to turn skin cells into different types of brain cell by exposing them to two small molecules of RNA, a similar molecule to DNA. These specific "microRNAs” unravel target stretches of DNA, or genes, which are responsible for the identity of the cell. In doing so, proteins called transcription factors can access the DNA sequences, which result in the expression of genes which govern the development of neurons. Armed with this knowledge, the researchers added to these cells the same transcription factors present in brain regions containing MSNs. This combination of ingredients was found to result in the direct conversion of skin cells into this specific type of neuron.

“We think that the microRNAs are really doing the heavy lifting,” co-first author Matheus Victor said in a news-release. “They are priming the skin cells to become neurons. The transcription factors we add then guide the skin cells to become a specific subtype, in this case medium spiny neurons. We think we could produce different types of neurons by switching out different transcription factors.”

When the researchers analyzed these reprogrammed cells, they were found to show similar gene expression profiles to human MSNs. Furthermore, after they were transplanted into the brains of mice, they survived for over 6 months, exhibited similar properties to the native MSNs and even connected to distant neuronal targets in the brain.

The researchers are now taking this work one step further by using the same technique on skin cells taken from Huntington’s patients. To investigate whether these cells can alleviate some of the symptoms associated with the disease in animals, the researchers plan to transplant these cells into mouse models of Huntington’s.

To receive updates of the blog via email, please enter your email address below.

Thank you
Dr.Prashant A. Jani
MD,FCAP,FRCPC
Bio link:
https://bio.fm/jani
Thought for the day: " Mind should always be trained to think of the welfare of others."-Srila Prabhupada.