Although desmoplastic melanoma represents less than 2 percent of all melanomas, it's frequently misdiagnosed, due to a lack of distinctive clinical presentation features. Histologic diagnosis is rarely straightforward either. 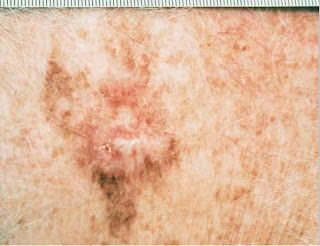 Patients are often middle age-to-elderly and present with the tumor most often on the head and neck region. The lesion may resemble a scar as it is often a hard nodule or plaque.
Pigmentation is variable but often absent. The tumor has ill-defined margins and is very infiltrative, making local control difficult. Sentinel lymph node excision is routinely performed but rarely positive.

Histology :
The histology can also masquerade as a scar . The epidermis is often atrophic and may or may not have a precursor (in situ) lesion. Characteristically, the tumor is in the dermis as spindled melanocytes resembling fibroblasts.Often, there is an edematous or desmoplastic stroma with
scattered lymphoid aggregates. Perineural invasion is common.In about one third of the lesions, there are foci of epithelioid or conventional melanoma. 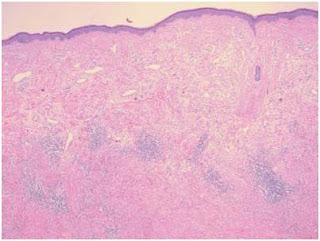 At low power, there is a fibrotic lesion in the dermis with scattered lymphoid aggregates. 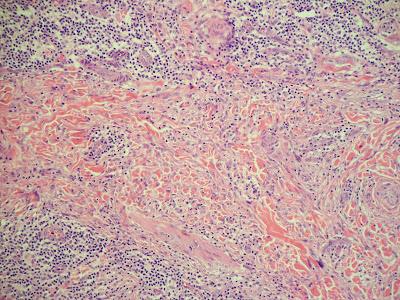 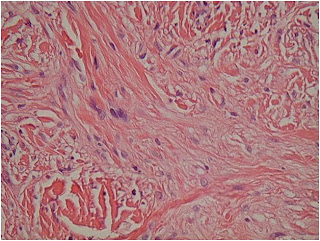 The lesion is paucicellular, but there is cellular atypia .

Reporting of the histologic subtype of melanoma is common practice, but it is unclear what impact, if any, it has on management decisions. One possible exception is desmoplastic melanoma, a distinct subtype with a unique biologic behavior. It is now recognized that desmoplastic melanomas present with greater tumor thickness (Breslow level) than their conventional counterparts but fail to demonstrate a corresponding higher sentinel lymph node involvement or higher mortality.