Micropapillary Carcinoma of the Breast

Histological aspects of invasive micropapillary carcinoma of the breast

Histologically, invasive micropapillary breast carcinoma is characterized by:
-Clusters of cohesive tumor cells within quite prominent 'clear spaces', which resemble dilated angiolymphatic vessels.
-The nuclei of tumor cells around the periphery can often bulge with a kind of 'knobby' appearance.
- It is also quite common to see lymphatic involvement with invasive micropapillary breast cancers. 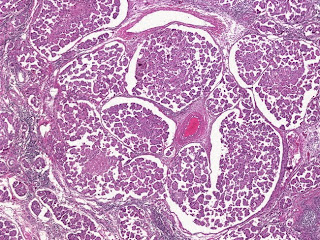 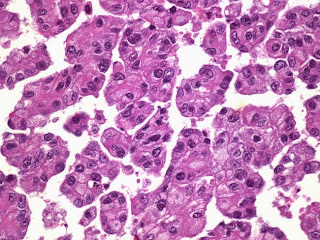 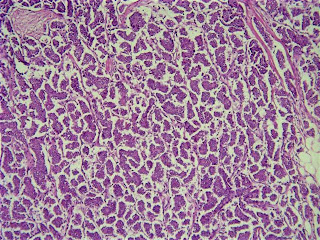 -Invasive micropapillary breast carcinoma tumors will often show lymphocytic infiltration.
-They tend to accumlate in the breast stroma, often forming a lymphoid follicle. The presence of lymphocytes within the tumor will tend to suggest a more aggressive cancer; more likely to metastize to the lymph nodes.
-Invasive micropapillary breast cancer is also characterized histologically by an 'inverse polarity' of the tumor cell clusters. To clarify, within the breast the 'functional unit' of the breast duct wall is a 'polar' double-layered tube consisting of luminal epithelial cells surrounded by myoepithelial cells and a basement membrane. In other words, there is an order; an asymmetrical organization from 'outer to inner', and without this polarity, the breast ducts would not able to properly excrete and transport breast milk. But with micropapillary breast carcinoma (and some other breast cancers) this polarity is reversed. The clusters of malignant cells which formed have the myoepithelial cells outside of the epithelial-derived cells, with the basal layer exposed.

Treatment for invasive micropapillary carcinoma of the breast
-Invasive micropapillary breast carcinoma is a highly aggressive from of breast cancer which requires the earliest possible diagnosis and aggressive intervention and management.
-The high rate of local recurrence and high probability of lymph node metastasis will usually prompt the surgeon to suggest either a modified or full radical mastectomy, though breast conserving surgery is attempted in a minority of situations.
- Axillary dissection will usually accompany a modified or radical mastectomy.
-Adjuvant treatment with chemotherapy is often utilized as well, but usually only if there is evidence of axillary node metastasis, or when there is not yet lymph node metastasis but the tumor is larger than 1 cm.
Posted by Dr.Prashant A.Jani M.D.FRCPC No comments:

Cytokeratin AE1/AE3 is worthwhile to employ inthis situation, primarily because most hepatomas are negative or only focally weakly reactive for this anti-body. We have seen a small number of hepatomas that express strong cytokeratin AE1/AE3, but they represent <5% of the cases of hepatoma that we see on our consultation service. As such, strong reactivity with AE1/AE3 usually allows one to place clear cell hepatoma much lower on the list of potential primary sites. The large majority of lung carcinomas express AE1/AE3, and most clear cell carcinomas of the kidney also express AE1/AE3, although it may be patchy and weak, a point to keep in mind when dealing with a small sample of tumor.

It is my great pleasure to inform you that  Oncopath Diagnostics-India's first virtual Cancer Pathology centre has started at Pune. !!!!

With the help of India's first and Only digital pathology slide scanning system at Oncopath diagnostics, pathologists from USA, UK and Canada will be able to provide expert consultation to patients in India !!!!

This will specially helpful for patients and physicians/pathologists in getting second/expert opinion in difficult cases.

Some of the newspaper articles published in local news papers in India ,which highlights Oncopath Diagnostics work in India are mentioned below.
Newspaper articles: click the below links
-Indian express
- sakal